I awoke before the sun this morning. Hastily flung on some clothes, packed some water and pain au chocolat and tip toed my way through the campsite to get to the car. Once in I set the Sat Nav for Leyde and off I went...

For those who don't know it, Leyde (known as Les Roches Blanches by the locals) is a very classy point setup needing a good sized W-NW swell and SW-SE winds. You will understand my sense of excitement then when I saw this local forecast:

I got to the little carpark, headed down the track and.... 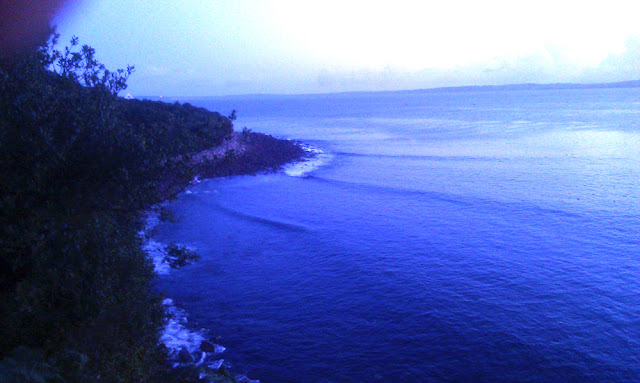 Still, this is a local classic and I'm on holiday so what the f*ck eh?  Paddled out, had 3 waves and even got a glide going on one or two but the waist high waves and a dropping tide meant I was clunking around on bare rock a lot of the time. Good job mats are what they are. A board would've been dinged to bits.  Still, I can now say I've surfed Les Roches Blanches. Beautiful set up and would love to get back here when it's really on and like I say, the middle section on the ones I had was a delight.

After hopping out I nipped up the coast to look at Pors Theolen but that was dumping and Baie was well over head, closing out with a monster paddle. All the south coast spots were blown out but I did the tour just to see them which was good fun.

Sun's out too so it looks like MSW got the weather wrong. :-) Gonna have a bash at carp fishing with Webbo in a mo.

The second I finished this post it started BUCKETING down!

That's what it was.

Good guess from my vague description!