That my friends is the exhillation one emits after a really rewarding surf.  This avo saw me hit Baie des Trépassés with Jim at around 2.30pm (that's 1.30 proper time). We were met by a moderate cross shore wind and a solid and building swell. 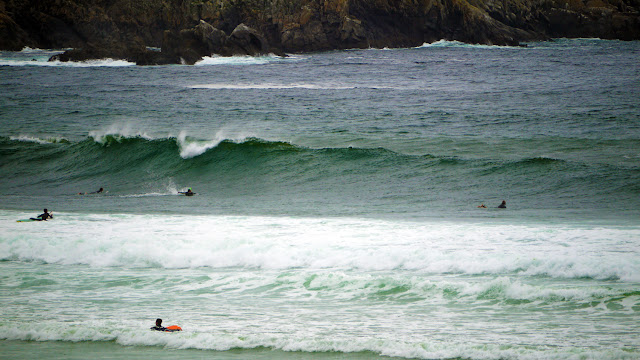 There were a few out but not as many as you'd expect due to the bloom of green algae which plays havoc with leashes. Obviously, that's not something I've had a problem with. :-) The other problem with Green Algae is that it is seriously poisonous when dry.

I'm reliably informed that it has killed a horse!!! (What he was doing in the sea is anyone's guess).

Anyway, Jim and I were not perturbed and paddled out to a peak which we pretty much had as our own. Very bumpy but also very long rights which we shared as party waves for the most part. 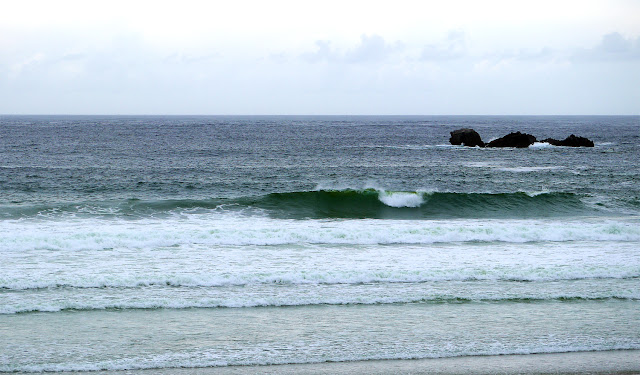 Jim was riding a very interesting bodyboard/paipo hybrid thing which almost kept pace with G-Mat 3 (not quite though).  Unfortunately, cramp ended Jim's session after an hour or so and his leaving seemed to curse the peak leaving me with head+ closeouts and a mother of a paddle.

Nonetheless I came out smiling. I had some great rides today and G-Mat 3 also showed herself to be The Tank she was intended to be coming through some decent poundings unscathed.

Anyway, off to bed now, I hopefully have an appointment with a renound point break in the morning.

Bodyboard /Paipo hybrid was it a Waveskater ? You can tell by Mottled colouring