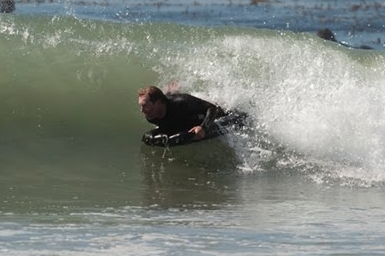 Another fine read from 23 Breaths:

As if anyone can have missed it, we have a thumping great swell heading our way. 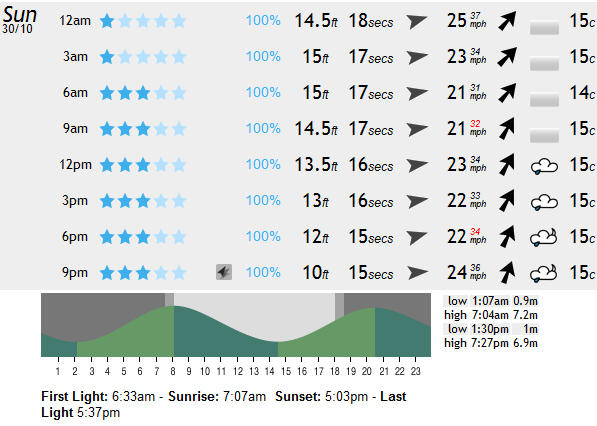 Seems to be something to do with this: 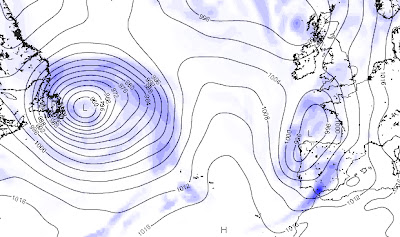 Anyway, I've been chatting with Cookson and we're gonna look at Hayle Rivermouth. Meeting at the McDonnald's carpark at Hayle at 0700.  Gonna be PUMPING!!!!!!!!

PS Dont forget the clocks go back the night before.
Posted by GRAYMAN at 19:47 2 comments:

Email ThisBlogThis!Share to TwitterShare to FacebookShare to Pinterest
Labels: Hook-ups 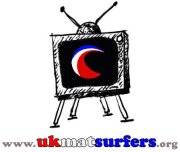 Hello there's a UK Mat Surfers group on Facebook for them what use it.

It can be found HERE.

Anyone who has made a meet or is already a member of the UKMS Crew is eligible to join.

Many of you may have read this but here goes anyway.

Mary Mills (AKA Surfsister) has written THIS PIECE for the Surfmeisters blog. An excellent discussion on what we do I think.

Here's a short vid from yesterday's session. Not great waves by any stretch but we had a few in among the close-outs. Crazily busy by Mawgan Porth standards too but we managed to keep ourselves to ourselves.

Had a frustrating session today in backing of Mawgan Porth. More size than expected but not that good and a strangely large crowd.

Anyway, I got a couple of screen grabs from the GoPro. 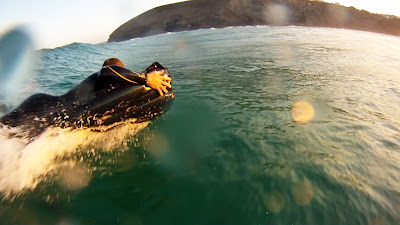 Here's one of Surf Empty (Dan): 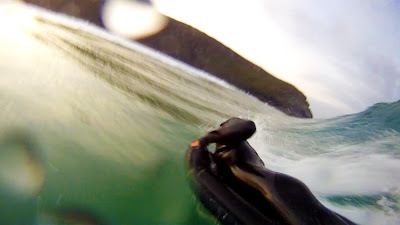 I'll be honest, the footage ain't up to much cause the waves were pretty poor.
Bluey was planning to joining us but broke down en route. :-(
Cheers
G
Posted by GRAYMAN at 17:28 2 comments:

I've gone and set up a UK Mat Surfers Twitter account.  I've kinda avoided doing this as I've never really got the whole Twitter thing but you have to move with the times I guess.

Anyway, you can find it at @UK_Mat_Surfers

You'll allso notice that there is a box showing tweets under the Chat Box.  If you're on Twitter and want a tweet to show up in that box add #ukmatsurfers at the end of your tweet!  You can also search that via Twitter to see what people are saying.

I've also set up a UK Mat Surfers list although I dunno if that's actually as useful as the box on here.  I guess it could replace the Chat Box if people prefer it.

Surfmats for sale on UKMS

High performance mats and grip that keeps you stuck!

HERE to get one. 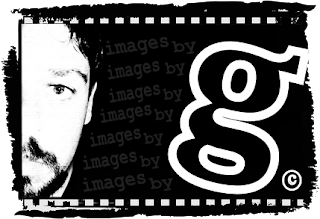 I have a new blog to show my pics and vids on. Flickr is OK but they seem to delete accounts at the drop of a hat and really don't like links.

Email ThisBlogThis!Share to TwitterShare to FacebookShare to Pinterest
Labels: Grayman, Other Sites, Photography

And people say I pull a sex doll face!? 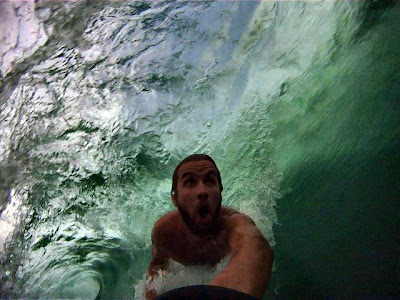 This is the master of the art of sensual gurning if you ask me. I am but the pupil...

anybody up for a session next week ? 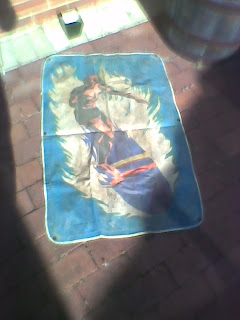 Will be staying in Bude for a week from Saturday arvo.
If anybody is up for a mat session, let me know.
Cheers
Henry
Posted by bluey at 15:31 7 comments:

Email ThisBlogThis!Share to TwitterShare to FacebookShare to Pinterest
Labels: Hook-ups

Email ThisBlogThis!Share to TwitterShare to FacebookShare to Pinterest
Labels: environment

Go an email from Old Surfer yesterday. He's since signed up and I'm sure will be adding posts of his own in due course but he kindly agreed to me putting this one up.

Hi G,
Thought you might like the attached pics and following spot review.
Where is it - Alderney in the channel isles, total land size 3.5miles
x 1.5miles, breaks- one beach and a few reefs in precarious offshore
positions known to the few local surfers but due to vicious tidal
flows, times and rips, reefs are best left to locals.

The beach break is Corblets bay, best conditions 3hrs after or before
high with southeast wind (offshore) and swell from north west ie across
from the south west of cornwall.Thankfully thats what I caught when
visiting my island resident sister in law this year.

Been visiting on and off for 30 years and usually get in at some time
board, bodyboard or bodysurfing.

Managed to get in last year after PG, bless him, sent my RTT just in
time for me to catch the plane two days later but as surf and my
matting skills not up too much had a good play around to christen lilo
lil'.

So back to this year end of september, matting skills still not up to
much but had studied all manner of matting videos on line and thought
it time to get going and enjoying my surfing again.

Had the beach to myself one day and two hours later felt I had at least
managed to take off and pull myself onto the mat without fluffing the
top of the wave down and be left floundering and kicking like a paddle
steamer trying to hook back up with the now breaking wave! No pics and
a 2 mile bike uphill still didn't wipe the grin of the stoke off my
face.

The second day was best and thanks to my ever patient wife handling the
camera was able to actually see that hey yes I did manage to catch a
few and look sort of composed whilst doing it.

Oh and by the way if I look a bit scary in the goggles and the
bandana.

The goggles are because without them, I have, to the delight of my
fellow lineup, been known to paddle for an approaching darkening rain
storm on the horizon thinking it was the set of the day mmmmm short
sighted see, and the bandana, well, I can tell you skin cancer on your
forehead hurts when they cut it out and takes a while to heal all them
stitches, so don't want to repeat that eh.

Thanks for taking the time to keep the UK mat scene going and for
reading these ramblings of the old surfer,

Hope to meet up at mat meet 8, cheers for now, mart. 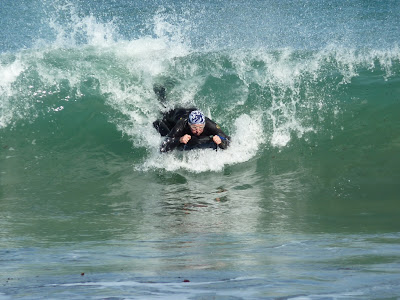 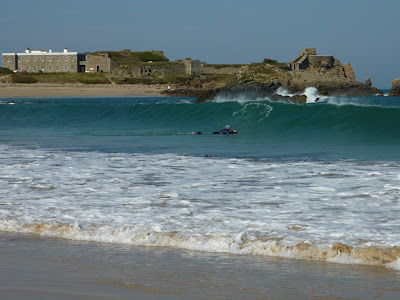 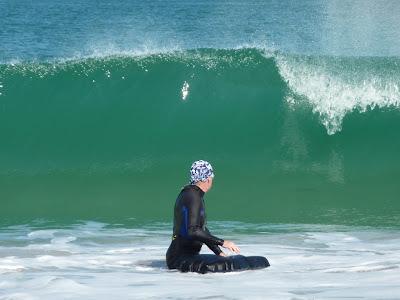 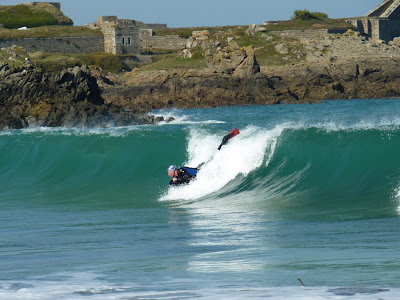 The thing with welding mats is that the tools get hot! 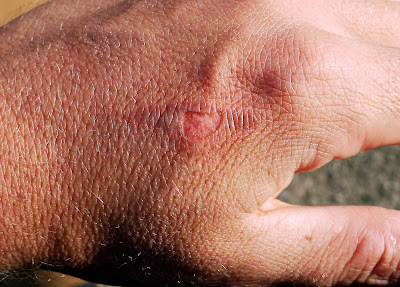 This was sore but OK til I found an unexpectedly shapely, offshore wave locally earlier. All good fun but took the blister off getting out of my wettie. 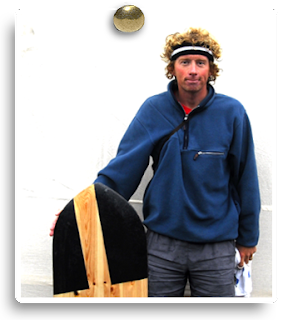 Evidence that one of our own has been playing away...